Zhang Boli: The efficacy of TCM in the fight against COVID-19

Since arriving in Wuhan, 72-year-old academician Zhang Boli has been working around the clock for more than two months investigating the use of traditional Chinese medicine on patients with the novel coronavirus. 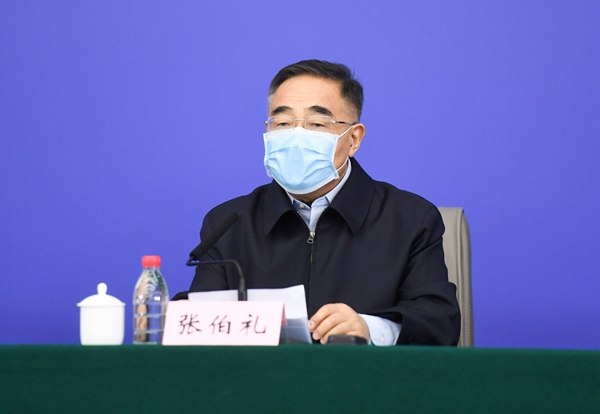 Zhang Boli, an academician of the Chinese Academy of Engineering, speaks at a press conference in Wuhan, capital of central China's Hubei province, March 23, 2020. [Photo/Xinhua]

Since Zhang Boli arrived in Wuhan as part of the Central Guidance Team on Jan.27, the 72-year-old academician of the Chinese Academy of Engineering (CAE) has been working around the clock for more than two months.

Zhang, who is also a deputy to the 13th National People's Congress, said he felt duty-bound to help his country at this time of crisis.

COVID-19 patients in Wuhan, the epicenter of the outbreak in China, have received treatment in collective isolation and under classified management, according to decisions made by the Central Guidance Team. Zhang and other experts in traditional Chinese medicine (TCM) strongly advised the use of TCM on all of the isolated patients.

With the approval of the Central Guidance Team, Zhang and 208 other experts formed a TCM medical team and started treating patients at a makeshift hospital in Wuhan's Jiangxia district. They decided to apply a comprehensive treatment solution primarily using the Qingfei Paidu Decoction and Xuanfeibaidu Formula, complemented by tai chi, baduanjin and acupuncture therapy.

After treatment with the TCM formulas, none of the 564 mild and common patients at the makeshift hospital developed into severe cases. In contrast, WHO statistics show that overall, around 6% to 10% of mild COVID-19 cases develop into severe ones. "More importantly, the blood biochemical indices of the recovered patients, such as the number of lymphocytes and leukocytes, showed significant improvements," explained Zhang.

The effective practices at Jiangxia Hospital were swiftly applied by other makeshift hospitals, with 90% of such hospitals in Wuhan adopting TCM treatment. Having clearly demonstrated its efficacy, TCM has become an important part of the "Chinese approach to fighting COVID-19."

While promoting the use of TCM, Zhang also stepped-up related scientific research to provide a basis for clinical decisions.

Zhang is leading a research program to evaluate the clinical value of TCM combined with western medicine in the prevention and treatment of COVID-19, which was launched on Feb. 3. In order to improve the research coverage and allow data to be published in a timely manner, his team developed a dedicated system for the acquisition and analysis of COVID-19 clinical data. Meanwhile, TCM experts studied the details of 1,000 patients in varying conditions from nearly 20 hospitals across the country. They concluded that COVID-19 can be considered in TCM terminology as "a disease caused by noxious dampness," giving direction to TCM treatment. Under Zhang's guidance, his team also evaluated the clinical efficacy of various TCM treatments, and carried out drug screening and development.

Many of the medical teams dispatched to Wuhan have now started to head home, but Zhang's return date has yet to be decided.

After the closure of the Jiangxia makeshift hospital, Zhang shifted the focus of his work to the rehabilitation of recovered patients. "Many severe patients still have such symptoms as heart palpitations and fatigue even after they've been discharged from hospital. Some patients also suffer from damage to their lungs and other organs. We need to assess their conditions and then apply targeted rehabilitation treatments," Zhang said.

On March 24, a platform offering rehabilitation services for medical workers infected with the virus was put into operation. "The platform is sponsored by the CAE and the Tencent Foundation, with Wuhan Union Hospital and Wuhan Hospital of Traditional Chinese Medicine providing specific services. We're trying to help the medical workers recover completely and return to normal work and life within two to three years," explained Zhang, who is in charge of the platform.

Meanwhile, the situation in other countries is also worrying to Zhang. "We have empathy for the current situation in Europe and the United States," he said.

He said that many foreign organizations have invited him to share China's experiences in combating the pandemic, especially regarding the use of TCM.

"We've given prescriptions to various countries based on their climate and other conditions. In addition, we've also sent them some TCM."

This article was published in Science and Technology Daily in Chinese, and translated by Zhang Liying.