The Trump administration's failed response to the coronavirus crisis has been a disaster. But Trump's admission that he purposely delayed tests is a new low. 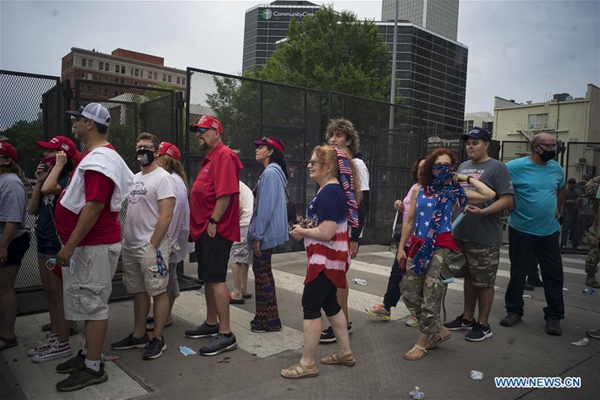 Supporters wait to attend a campaign rally for Donald Trump in Tulsa of Oklahoma, the United States, June 20, 2020. U.S. President Donald Trump held his first rally in more than three months in Tulsa on June 20, despite warnings from health experts against large-scale gatherings amid a surge in COVID-19 cases after reopening in some states. [Photo/Xinhua]

When the rate of new coronavirus cases began increasing in many U.S. states that had opened bars and restaurants too soon, Vice President Mike Pence blamed it on increased testing.

More tests mean more cases, right? No, it just means that the United States did not have enough testing before and many cases went unreported. In fact, as I noted in my previous column, the rate of positive tests has increased lately, indicating that a larger percentage of the population is contracting the potentially lethal virus.

It has been widely reported that the U.S. suffered from massive delays while setting up testing, which exacerbated the severity of the outbreak early on. Over 150,000 tests produced by the Centers for Disease Control and Prevention were unusable because they were defective, and the national government did not authorize private hospitals and labs to use their own tests until February 29. By then, the disease had already spread across the whole country undetected.

But it wasn't just government incompetence that has limited Americans' access to testing.

If we are to take President Donald Trump at his word, Trump's "strategy" also prevented many Americans from getting tested. At his campaign rally in Tulsa, Oklahoma on June 20, his first in three months, Trump admitted that he intentionally ordered the government to slow testing down so as to keep the reported numbers artificially low.

This is consistent with Trump's overarching game plan towards coronavirus, which has, from the start, been to deny and cover up the facts. In January, he said, "It's one case from China, and it's completely under control." In February, he called the virus a "hoax." Most recently, he directed Mike Pence to write an op-ed titled "There Isn't a Coronavirus 'Second-Wave.'"

When a cruise ship full of infected passengers was docked off the coast in March, Trump tried to block the passengers from coming ashore, just to keep the number of reported cases down. At the time, he said, "I like the numbers being where they are. I don't need to have the numbers double because of one ship."

Now this "strategy," if you can call it that, clearly didn't work to slow down spread of a virus. Coronaviruses are unthinking submicroscopic vessels of RNA. They could hardly know or care what Trump says.

This presents a unique challenge to Trump, who is experienced at combating cable news hosts on Twitter but unable to respond to a real crisis that has nothing to do with politics or branding.

However, Trump's denialism hasn't been able to prevent the increase in cases from being recorded. First of all, it is difficult to say whether officials actually responded to Trump's demand to limit testing. Secondly, most of the testing now is being conducted by states and private laboratories, over which Trump has no authority.

The increase in state-by-state cases is most pronounced in states which opened first and opened most fully. For example, Florida hit a new record with 4,049 cases on the day of Trump's rally. Oklahoma, where Trump held the rally, is also experiencing record coronavirus cases. Texas recorded more than 4,000 cases per day three times in one week. Even pro-Trump media outlets, like Fox News, have to admit that cases are rising.

Nationally, the trend is also up over the past week. On June 19, there were 33,000 new cases in the whole country, most than any day since May 1.

Mitchell Blatt is a columnist with China.org.cn. For more information please visit:

Opinion articles reflect the views of their authors, not necessarily those of China.org.cn.