You are here: Home

Locals pitch in to make forum a success

With the 2013 Fortune Global Forum under way in Chengdu, locals are overcome with excitement over the arrival of business elites and political leaders from around the world.

"It is cool that we are holding the event," said taxi driver Yi Xiangdong, as he drove me to Shangri-La Hotel Chengdu, the forum's main venue, for an interview.

"We are the fourth city in China after Shanghai, Hong Kong, and Beijing to host the internationally renowned forum and the first in western China to do so," the 37 year old said proudly in perfect Mandarin, rarely heard in other western regions, where dialects are mostly spoken.

A native of Mianyang city in Sichuan province, Yi has been living in Chengdu for more than 10 years and became a taxi driver two years ago.

"It will surely boost Chengdu's image and attract more people to the city, and I will have more fares."

Yi said many cab drivers have been studying English since March in case that they might have a foreign passenger.

"Unfortunately, I have not met one yet so far," he smiled, adding that the possibility will grow as the forum goes on.

He said the event will also encourage the government to further improve local infrastructure, citing as an example the Second Ring Road, which opened to traffic on May 30.

"Now traffic flows smoothly and that's what I like as a taxi driver," he said.

When I waved goodbye to Yi and walked across the street, I found that many locals share his enthusiasm.

After the interview, I found a nearby volunteer station along the street to inquire about a bus back to the hotel.

A woman with a friendly face and in her fifties quickly gave the answer without even checking her map.

"They call me a walking map," said the woman who asked to be referred to simply as a volunteer.

Beaming at me, she said that she has memorized most of the bus and metro lines around several venues of the forum.

The retired teacher said she is proud that she can do something for the "big event".

"There are a lot of foreigners in Chengdu these days asking where to try Sichuan cuisine or see some traditional buildings and those volunteers who speak English will help me tell them to go to Jinli or Kuanzhai Xiangzi," she said.

She said the forum is "good for both the city and the people", adding that it will help attract more foreign investment and thus create more job opportunities.

She said there are more than 1,200 volunteers in Jinjiang district, where main venues of the event are located, to offer help on streets.

In addition, there are another 1,263 volunteers serving forum participants, and they are doing a tougher job.

When I called another volunteer Song Sha at 10:30 pm on June 6, she said she was just about to leave for home from the InterContinental Century City Hotel Chengdu. She served as a coordinator and interpreter for a US team at the forum's opening night reception held at the hotel.

The 24-year-old girl, who just finished her studies in the UK, started working at 9:00 am. After a hectic day wearing high-heeled shoes, she said she was exhausted and her feet were aching.

"But it is worthwhile," Song said.

"As a native in Chengdu, I would like to do something I can for it.

"Some volunteers worked even longer hours. On June 5, some stayed until 2:00 am at the airport waiting for forum participants from different countries."

Song said she was previously assigned to another position and later sent to the hotel for help.

"I don't mind what I do as long as I can give a helping hand."

Song was also a volunteer at other large events, including the Shanghai World Expo in 2010, but she said she has different feelings this time.

"Chengdu is my hometown, and I feel really proud that I can help." 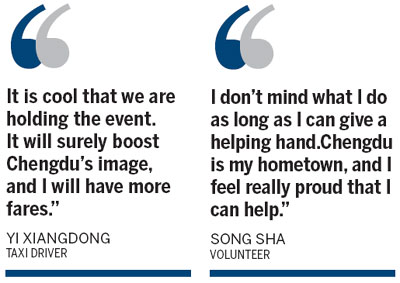