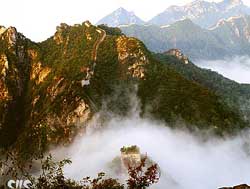 From Shanhaiguan, northeast of Qinhuangdao City in Hebei Province on the east coast, the Great Wall rises and falls with the contours of the mountains westwards, crossing nine provinces, municipalities and autonomous regions over 6,700 kilometers, to end at Jiayuguan, southwest of Jiayuguan City in Gansu Province.

Building of the wall began during the Spring and Autumn period (770-476 BC) and the Warring States period (475-221 BC) of the Eastern Zhou Dynasty. Ducal states at that time built walls to defend their individual territories. After the First Emperor of the Qin Dynasty crushed all rival states, he founded the first centralized and unified dynasty in Chinese history. To consolidate the country and ward off invasion by ethnic minority tribes in the north he had the walls linked and extended, giving rise to the 5,000-kilometer-long Qin Great Wall. Later dynasties from Han (206 BC – AD 220) to Ming (1368-1644) continued to build and improve the wall, extending it by more than 1,000 kilometers to its present magnitude.

The Great Wall comprises walls, passes, watchtowers, castles and fortresses. The walls are made of large stone blocks. From east to west, the sections at Shanhaiguan, Jinshanling, Mutianyu, Badaling and Jiayuguan have become popular tourist attractions. 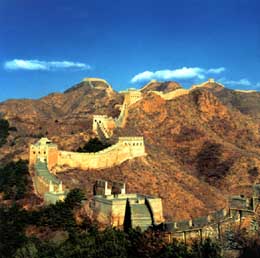 Most of The Great Wall that we see today dates back to the Ming Dynasty. The best-preserved and most imposing section is at Badaling near Beijing city. This section, located at the head of the Juyongguan Pass, is made of large blue bricks and has an average height of 7.8 meters. Five to six horses can be ridden abreast along it. At regular intervals there is an arched door giving access to the top of the wall. The walls feature regular lookout holes, window embrasures and castellated crenels. Beacon towers for passing on military information also appear at fixed intervals. All of these emphasize the important role of the Great Wall in military defense.

As one of the most magnificent ancient defense works, the Great Wall was put on the world cultural heritage list in 1987.

Address: On the border between Beijing's Miyun County and Hebei's Luanping County.
Entry ticket: 30 yuan;
Access: Take a bus from Dongzhimen to Miyun and then change to a local bus or hire a taxi.

The Jiankou Great Wall (Arrow Lock) is located in Huairou County, 73 km north from Beijing City. It connects with the Mutianyu Great Wall 10 km to the east, and with the Huanghuacheng Great Wall to the west. This section was built in 1368 during the period of the Ming Dynasty.

The Jiankou Great Wall is built of large white hill rocks which makes it very prominent from a distance. The major section of this Great Wall is built along a mountain ridge with tall cliffs on each side, and as a result of the lack of repairs, it is now one of the most dangerous sections of the entire Great Wall.

Bus routes:Tourist Bus No. 6 from Xuanwumen, Qianmen and Dongsi Shitiao; or take Bus No. 916 from Dongzhimen to Huairou, and then change to a local bus or hire a taxi;

Warning: Tourists occasionally lose their bearings here. It is wise to recruit the services of a guide. The area is dangerous, so care should be taken.