Prospect Hill (Jingshan) is situated just north of the Palace Museum. From the Yuan Dynasty onwards, this area was a "forbidden garden".Opened to the public in 1928, it formally became a park after 1949. 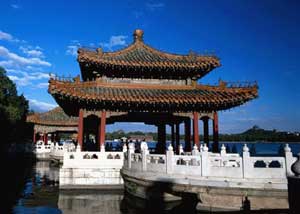 Prospect Hill was built up from mud dredged from the surrounding lakes and moats at the time of the construction of the Yuan capital Dadu. At that time it was known as Green Hill. During the Ming Dynasty, it was enlarged to its present size and, because coal was stored at the foot of the hill, it became known as the Coal Hill (Meishan). In the time of Qianlong (1736-1796), a palace was built on the north slope and a tile-glazed pavilion built on its peak. Since the hillside was planted with numerous fruit trees, the park was also known for a time as the Garden of a Hundred Fruits (Baiguoyuan). Ancient cypresses thrived, and in tribute to its scenery, it was renamed the Prospect Hill. 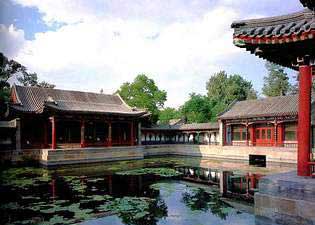