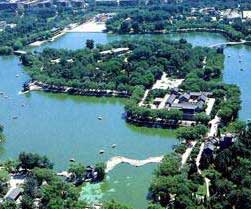 Taoranting Park, located in the southwest, derives its name from the Joyous Pavilion that once stood on the grounds of the Temple of Mercy (Cibeiyuan).

Jiang Zao, a secretary in the Ministry of Works, built the pavilion in 1695 during the reign of Emperor Kangxi. Therefore, it was also known as Jiang Pavilion. In the Ming and Qing dynasties, a brick kiln was built in the neighborhood of the Temple of Mercy at what is now the Kiln Terrace. Jiang served as a director in the kiln and came to enjoy the grounds to have a pavilion built there. The original wooden inscription still hangs inside the gate of the Temple of Mercy. The characters inscribed on it, "Taoran" (Joy), in Jiang's own calligraphy, are drawn from the lines of a famous poem by the Tang poet Bai Juyi: "Let us wait until the chrysanthemums are golden and our home-brewed wine matured, then with us all shall be intoxication and joy". The original pavilion, which was built on a hill, stood higher than the city battlements. In fall, it was a favorite destination for Beijing residents on the Double Ninth Festival (9th day if the 9th lunar month), when tradition prescribed that one should "ascend to a high place". 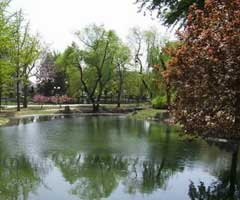 In the past, scholars from all over China wrote poems and essays in praise of Taoranting, though in imperial times, the scenery was not particularly attractive. Houses of ordinary citizens were not permitted to stand at an elevation higher than the emperor's palace, and apart from the hillock on the Central Island, all the highest points in the city were occupied by the imperial family. This was therefore the only place where the common people could come for a view of the city. As visitors increased, the original small pavilion was demolished to make way for a large building, which in turn was augmented by three buildings still found today inside the Temple of Mercy.