A destination to be explored 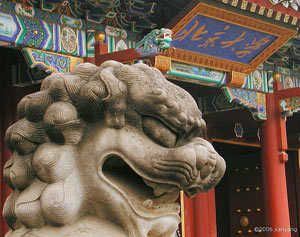 Peking University is one of China's most famous and prestigious educational institutions and it's more than just a place for studying. It is a great destination for tourists and locals alike.

Few realize what a beautiful campus Peking University is. As you take a stroll, you will be impressed at the history the university holds.

The handwriting of Chairman Mao, who was an assistant librarian here in 1918, can be seen on signs of the buildings. In the Peking University library, Mao worked under Li Dazhao, the man who later introduced Mao to Communism and was a co-founder of the Communist Party in China.

Edgar Snow, author of the world-famous "Red Star Over China," was a journalism professor in the 1920s at the university and made contributions to Sino-US relations during the 1940s and 50s. There is a memorial to him on campus near Weiming Lake. Half of his ashes are buried there and the other half are in the United States. 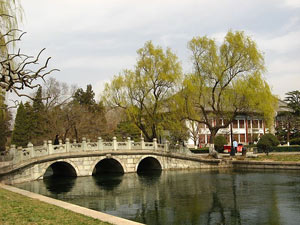 Peking campus is like an imperial garden with many traditional houses, lakes, pagodas and museums. The pagoda beside Weiming Lake near the East Gate in the center of campus is representative of the ancient Chinese architecture in the university.

There are several gates that lead into campus - East, West and South gates. Yet each of these gates are specifically for cars or just for people to walk through. These rules are taken seriously. Security will stop you if you try to go through the wrong gate.

The most popular one is the "West Gate" and many tourists take pictures here. Alumnae donated the gate in 1926. During the Cultural Revolution, the stone lions that guard the gate were almost destroyed by Red Guards. It is said that other students from the university protected the lions and would not let them be demolished.

Weiming Lake is one of the most popular and scenic spots on campus. The word "wei ming" in Chinese means "without being named." Qian Mu, a famous scholar in China, named this "No Name" Lake because many people have tried to name it and capture its essence but no one could agree.

The lake was once a part of a royal garden in the Qing dynasty and is still regarded by visitors as sacred. The lake is right in the middle of campus and many students can be seen studying around it. During the winter when the lake freezes over, students walk on the lake or skate on it. The marble boats by Weiming Lake and the twin "cloud pillars" at the administration building and Beijing Library are examples of structures taken from the Summer Palace, which is not far from campus.

There are also museums on campus to check out. There's the Museum for University History as well as the Arthur M. Sackler Museum of Art and Archaeology, which contains more than 10,000 objects spanning a period of 280,000 years. Tickets are 20 yuan.

Remarkable items in the museum include funerary objects that were excavated from the graves of feudal lords thousands years ago. There were ritual pottery vessels as well as brilliant and elaborate pieces of jewelry on display. There were also bones of human remains set up in a traditional burial style of that period.

There are also many monuments dotted throughout the campus. One monument was donated by Spain in 1986 during the Spanish year in China. It's a statue of Cervantes, a famous Spanish author who wrote "Don Quixote" in the 14th century. However, the statue's hand is missing a sword, presumably stolen by students.

As you walk through campus there are buildings, classrooms and dorms. Most have a Chinese-style architecture but there are a few modern buildings as well. Peking University has over 15,000 undergraduates and 15,000 postgraduate students. There are approximately 2,000 international students on campus every year, making it one of the largest international college campuses in China.

A word of advice though: when visiting and snapping pictures, be sure to quietly observe and not speak loudly near classrooms. After all, at its core Peking University is a campus.

Along with shops, places to eat, and vendor's carts lining popular spots with cold drinks, snacks and PKU memorabilia to buy, enjoying the scenery and history Peking University is a meaningful adventure.