Snacks of Beijing can fall into three varieties: Han, Hui and imperial snacks, which are generally prepared by steaming, deep frying, frying in shallow oil, and instant boiling. Some people regard snacks of Beijing as "living fossils." Now snack restaurants can be found all over Beijing, such as Longfusi and Huguosi snack counters.

As white as snow, this delicacy is made of sticky rice. The rice is first steamed then pounded and shaped into a ball. It is then given a filling, which might be sesame and white sugar, pea-flour, jujube paste or some other treat. Flexible in consistency and with a distinctive smooth texture, this dainty snack became a favorite of imperial and noble families during the Ming Dynasty (1368-1644). It is said that it came to be called Ai Wo Wo (emperor's special) because one particular emperor loved it so much. The base for this snack is Douzhi (Mung Bean Milk) itself another Beijing delicacy in its own right. Both are firm favorites with native Beijingers. Chao Ma Doufu is a colorful dish with its alternating colors of grey, white, red and green. Its tastes are hot and sour. It is fragrant with a fluffy texture. The most original version is stir-fried in mutton fat but today it also comes stir-fried in rapeseed oil. What is most important during stir-frying is to reduce the water content and produce a sticky constituency.

This is a very popular Beijing snack. Crisp outside, they are soft and sweet inside. 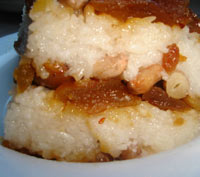 Available in Beijing markets all the year round, this delicacy is particularly associated with the month of March. The snack has a long history dating back to the 13th century and it is made and sold today much as it was in those days of long ago.

The most common form of Qiegao is made from glutinous rice with date or bean paste. Glutinous rice flour is first well mixed with water and then steamed. When cooked the rice flour is then kneaded evenly into thin layers. Each cake has four such layers with bean or date paste spread between them. It is served in slices on a plate with a dusting of white sugar. 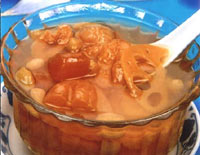 The Dictionary of the Beijing Dialect has this recipe for Guozi Gan: Take dried persimmon as the main ingredient, add dried apricot, and then soak them in warm boiled water. Add slices of fresh lotus root and mix well.

The dried persimmon brings amber and the dried apricot an orange-red, and then there is the white of the lotus root all set with sweetened osmanthus flower juice.

Served over ice, it tastes cool, crisp with a touch of sweet and sour. Very refreshing, it is a taste of summer 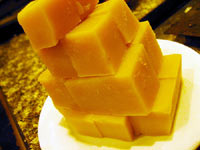 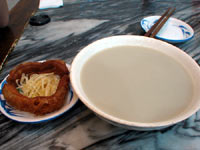 Beijing has a long history of making mung bean milk. As early as in the Liao (907-1125) and Song (960-1279) dynasties, mung bean milk was very popular. Local people of Beijing love to drink mung bean milk, because it is rich in protein, vitamin C and rough fiber and helps drive away summer heat, invigorate the function of the spleen and whet the appetite. 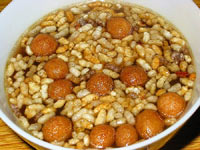 People in Beijing love to eat sweetened fried flour gruel because it is tonic. 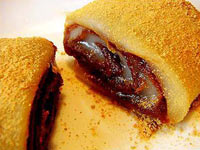 As one of the ancient snacks of Beijing, Ludagun is mainly made of soy bean flour mixed with sugar. It is a popular snack in Beijing.

Its unique taste has made it a favorite of most native Beijingers. It is made from the internal organs of the sheep. Sheep tripe, heart, meat from the sheep's head, lung and intestines are shredded then thoroughly cooked in a mutton stock with such seasonings as salt, seeds of the Chinese prickly ash, green onion, ginger and garlic. It is ready when the soup turns milky white after the surface is skimmed off. It is served with flavorings of coriander, sesame paste and pungent sauce.

One could be excused for thinking that Baodu (quick-fried tripe) was just a snack for ordinary people. But Baodu Feng was once a supplier of oxen and sheep tripe to the imperial kitchens.

Longfusi Snack street: Here you can enjoy many delicacies while strolling leisurely. All snacks of China gatheer here. Snacks of authentic Beijing style come from no others but Baikui Laohao where offers authentic soymilk, fried dough , Luzhu and diversified barbecues. It's a very typical Muslim restaurant getting more blossoming when the night curtain falls. The 100m-long snack stall form a hot scene. Stall-keepers hawk one after anther. Just buy some sausage or fried squid costing from 2 to 5 Yuan.

Wangfujing Snack Street: As the curtain of night falls, diners gather here, among whom are a larger number of foreigners. Prices are not too low of course. Dazzling snacks from all corners of the land gather at here. If wanna have a seat to enjoy your food more comfortably, you might go to Sun Plaza Restaurant at 5th Floor as well.

Gui Jie: Don't be frightened by this name. Actually, the name of this street originates from that it is a round-the-clock food street. More late at night, more hot here. If you are a night owl too, just come here. Take a seat and eat something while chatting to spend the long night as a strange visitor at a strange land. Stores here not so large but suitable for several friends drinking together and chatting quite well. Though with dated furnishing, they always have several dishes of everlasting aftertaste. Spicy Crab and Poached Fish in Pungent Sauce are eternally famous dishes yet. In summer, you can also go to the Yiyuan Restaurant. Under the umbrages in a Siheyuan with the moonlight overhead, it looks more like a grand party. Inside and outside of the restaurant flow courteous greetings of waiters and sweet smell of delicacies. Hungary at night ? Do not put yourself to a great inconvenience. Go to the Gui Jie directly by a taxi, and then, all is ok.