As early as 8,000 years ago, pottery was produced along the Yellow and Yangtze rivers. It was created by hand until the potter’s wheel and kiln were created in the Yangshao culture period (5000 BC to 3000 BC).

Pottery continued to develop during various dynasties. During the Zhou dynasty, pottery began to be decorated with a variety of designs. One notable achievement was the development of faience, or fine tin-glazed pottery. Pottery stepped into a whole new era during the Qin dynasty, if the world famous Qin Terracotta Army excavated in Xi'an, Shaanxi, is any indicator. The level of detail on the Terracotta Army has astonished archaeologists.

Pottery took another leap forward in the Tang dynasty with the creation of tri-colored pottery, which became world famous.

During the Ming dynasty, purple clay pottery blossomed. This famous unique pottery, seldom glazed is a special product of Yixing, Jiangsu, since it is the only place to find purple clay. It was and is the favorite of many people in China. 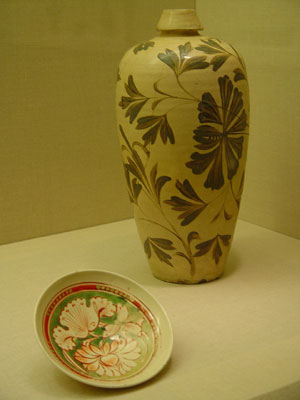