The least expensive cultured pearls today are not too different in appearance from the most expensive natural pearls in the world.

Freshwater pearls are very common in China. These pearls occur in mussels for the same reason saltwater pearls occur in oysters—the presence of a foreign material. To reduce irritation, the mollusk coats the intruder with the same secretion it uses for shell-building (nacre.) To cultivate a pearl, farmers slit the mussel and insert small pieces of live tissue from another mussel.

China has the resources that Japan lacks: countless lakes, rivers, and an inexpensive work force. The first Chinese cultured pearls were basic, until the 1990s, when China revolutionized pearling. The shape, luster, and colors of the new Chinese pearls now surpass the quality of those originally produced in Japan.

Farmers use a mild bleach, bright lights, and heat to create smooth pearls. Natural freshwater pearls often form in odd shapes, so farmers now reshape rejected pearls into spheres, and then put them back into mussels.

The best pearls have thick overlapping layers of nacre, which affects its ‘luster.’ To test a pearl’s luster, roll it with a pen in good light. The best pearls will reflect the pen the most. A large pearl is only more valuable than a small pearl if they are of equal quality—also, the rounder the better. Since pearls are organic gems, expect grooves, pits and dents—but matching color for a complete necklace is important.

Freshwater pearls are popular for the variety of colors they are available in: white, silvery-white, pink, red, copper, brown, lavender, purple, green, blue, and yellow. The most desirable are the pastel pinks, roses, lavenders, and purples. Color is affected by both the mussel species and water quality. Generally pearls assume the color of the shell in which they form. 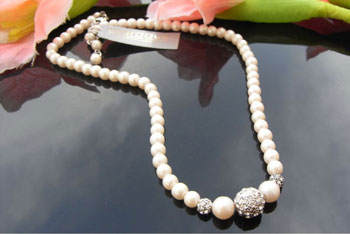