The Chinese began to use jade in the early Neolithic Age according to archeological findings. Archaeologists have excavated pieces of jade up to 6,000 years old. For thousands of years, jade has represented love and virtue and served as a status symbol in Chinese culture. It has served a variety of purposes in Chinese culture over time.

Until the Shang and Zhou dynasties, jade was used to make tools, weapons, daily utensils, accessories and ritual utensils. As trade boomed, the precious green stone was used as currency. Chinese people believed jade was the essence of Heaven and the Earth, so they carved jade into birds and beasts and worshiped the idols. It was even used as a musical instrument.

In ancient times, only aristocrats could own jade ware. The imperial seal of the Qin dynasty, the first feudal society in China, was made of jade.

Jade was later given attributes that made it a standard of morality. Confucius said jade had 11 virtues, which included benevolence, fidelity, polite etiquette, wisdom and sincerity.

Eventually, it became vogue to wear jade because Chinese people believed, and some continue to believe, that jade has supernatural power. They believed that owning jade wares and wearing jade ornaments would ward off evil influences and promote safety and auspiciousness 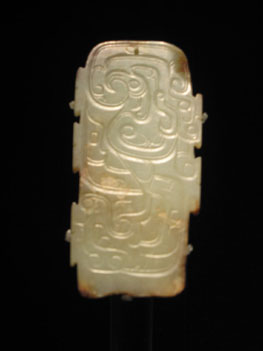