The kite, originally called zhiyuan in north China and yaozi in south China, is said to have been invented by a famous Chinese philosopher, Mo-tse, 2,300 years ago for military purposes. Legend says that he spent three years making it before it would fly. Kite flying became recreational starting probably in the Tang dynasty, when the royal family and aristocrats took an interest in it. 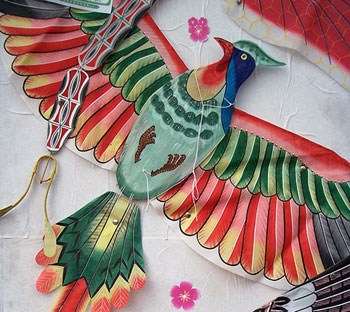 Kite making is a traditional Chinese folk handicraft. The best kites are said to be made in Tianjin, Beijing and Weifang.

The most famous kite craftsman in Tianjin was a man named Wei Yuantai, nicknamed Kite Wei, who made kites for more than 70 years. Kite Wei designed about 200 kites with many new structures, such as flat, hard-winged, soft-winged, three-dimensional and the famous foldaway kite.

More than fifty kinds of his kites have been exhibited at home and abroad. In 1915, Kite Wei’s kites won a gold medal and a certificate of merit at the Panama-Pacific International Exposition in San Francisco. Their fine craftsmanship, vivid appearance and good balance set them apart from other kites. Later generations of Wei inherited and developed these strong points.

Beijing is also famous for kite making. Available in a large variety of shapes, Beijing kites are made of paper or silk and completely hand-painted. They have a strong market reputation both at home and abroad. The most experienced kite craftsman in Beijing, Fei Baolin, has developed several hundred kinds of kites in different shapes and sizes. The smallest can fit in the palm of one’s hand.

Lastly, Weifang in Shandong province also is famous for its kite making and flying customs. Each year, the Weifang International Kite Festival is held in April, and kite fliers from all over the take part in the festival.