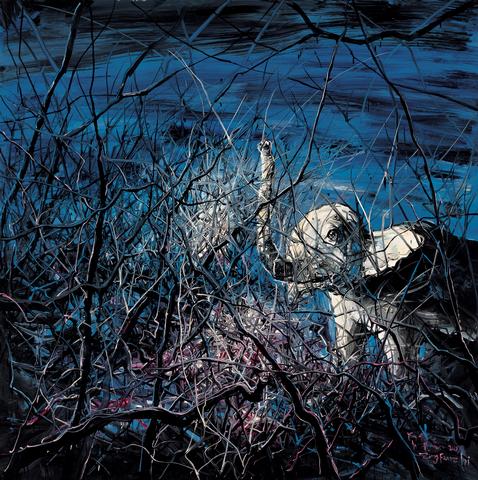 'Tai Ping You Xiang' is the title of a recent work by Zeng Fanzhi featuring a peaceful young elephant entering a Zeng Fanzhi signature landscapes. It is also the title of the exhibition at ShanghART's Beijing gallery space during the whole summer of 2008.

'Tai Ping You Xiang' originates from a poem by ancient Chinese poet Lu You (southern Song dynasty, 1125-1210). It means peace, stability and happiness. 'Xiang' is elephant in English, it shares a same sound with 'auspicious' in Chinese; therefore, it symbolizes auspiciousness in traditional customs. The traditional pattern is a picture of an elephant carrying a vase on its back, and the water in the vase can bring good fortune to people and is a symbol of peace.

The painting techniques adopted in the new work are the same as Zeng Fanzhi's series of landscape paintings and tend to be more peaceful, and the colours are lively and show a kind of incompatible tension. In this series of paintings, Zeng Fanzhi gradually weakened the uncertainty of the landscape itself, and tried to redefine the paintings from a deeper point of view especially the perspective of Chinese traditional culture. Under the background of the vanity of the society, the painting itself is expected to return to the nature.

Zeng Fanzhi was born in 1964 in Wuhan Province, and studied oil painting at the Wuhan Art Academy. Now he lives and works in Beijing. Zeng Fanzhi has exhibited at many major art institutions in China and around the world. His recent solo exhibitions include the Singapore Art Museum and Musée d'art Moderne de Saint-Etienne in France.