China's National Day, on 1 October, celebrates the moment in 1949 when Chairman Mao Zedong stood in front of 300,000 people in Tiananmen Square and declared the founding of the People's Republic. Today, hundreds of thousands crowd into the square to watch the dawn flag-raising ceremony. Firework displays and parades are also held around the city. As the start of one of China's 'golden week' holidays, it marks a time of mass travel across the country, with many workers going back home to their families. 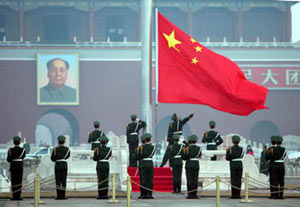