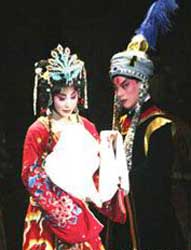 Opera Turandot is a story about a Chinese Princess who is as beautiful as the sun but cold as ice. The plot is based on a legend about Turandot,an empress whose heart will be conquered only by the brave man who can solve three riddles for her. If the suitor fails in the attempt, he must die. Prince Calaf, who arrives in Peking and is enchanted by her beauty, is determined to accept Turandot' challenge. His efforts are crowned with success, yet the cunning Princess decides to kill the Prince if she can find out his name by dawn. The slave Liu is captured, who in order to save Calaf, reveals that she is the only one who knows the Prince's name. Liu's selfless death and Calaf's kiss makes the ruler's heart waken.