"Master Kong," or Kong Qui better known as Confucius (Latin name) is believed to be born on September 28, 551 BC.

Confucius (551-479 BCE) was a great Chinese scholar and social philosopher, whose thoughts and teachings have profoundly influenced Chinese, Korean, Vietnamese, and Japanese thoughts and life. His preaching’s have guided millions for over 2500 years.

He was born in the small town of Tsu in what is now the Chinese Province of Shantung. His father was a magistrate and soldier. At the age of three, Confucius's father died, leaving him to grow up in poverty. At the age of 22, he started the first private school in China, teaching his philosophy of ideal personal conduct, benevolence, and justice by law. In his fifties, he became the Grand Official of Justice for the State of Lu. After leaving that position, he spent the last 13 years of his life traveling around China teaching his philosophies.

On Confucius birthday fairly typical ceremonies are held throughout the island of Qufu (Shandong), the birthplace of Confucius. This festival extensively celebrates his life in a charming way that you can best experience at the Confucius Temple in Qufu. On this day, some of the early rituals of Confucianism are practiced and in the grounds of the massive temple a great fair is held.

You can see grand celebrations on Confucius birthday. The events include musical performances and dancing using ancient instruments, wearing traditional costumes and other rites. The memorial party is joined by thousands of people. Good foods are also sampled at night street stalls. On Confucius birthday, not only is his life celebrated but his death is also venerated. 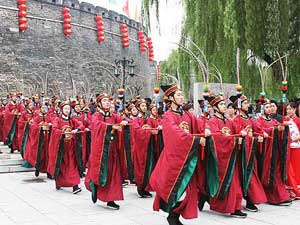