Qixi, or the Seventh Night Festival, falls on the seventh day of the seventh lunar month, which is usually in early August. This year it falls on Thursday, August 11. 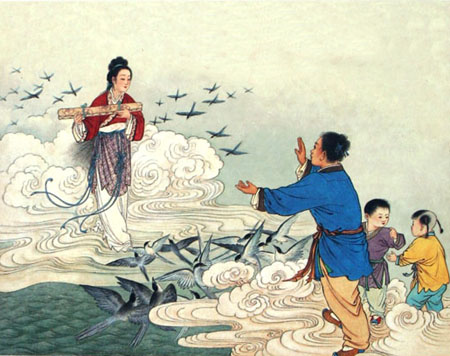 As the story goes, once there was a cowherd, Niulang, who lived with his elder brother and sister-in-law. But she disliked and abused him, and the boy was forced to leave home with only an old cow for company.

The cow, however, was a former god who had violated imperial rules and was sent to earth in bovine form.

One day the cow led Niulang to a lake where fairies took a bath on earth. Among them was Zhinu, the most beautiful fairy and a skilled seamstress.

The two fell in love at first sight and were soon married. They had a son and daughter and their happy life was held up as an example for hundreds of years in China.

Yet in the eyes of the Jade Emperor, the Supreme Deity in Taoism, marriage between a mortal and fairy was strictly forbidden. He sent the empress to fetch Zhinu.

Niulang grew desperate when he discovered Zhinu had been taken back to heaven. Driven by Niulang's misery, the cow told him to turn its hide into a pair of shoes after it died.

The magic shoes whisked Niulang, who carried his two children in baskets strung from a shoulder pole, off on a chase after the empress.

The pursuit enraged the empress, who took her hairpin and slashed it across the sky creating the Milky Way which separated husband from wife.

But all was not lost as magpies, moved by their love and devotion, formed a bridge across the Milky Way to reunite the family.

Even the Jade Emperor was touched, and allowed Niulang and Zhinu to meet once a year on the seventh night of the seventh month.

Traditionally, people would look up at the sky and find a bright star in the constellation Aquila as well as the star Vega, which are identified as Niulang and Zhinu.

The two stars shine on opposite sides of the Milky Way.

In bygone days, Qixi was not only a special day for lovers, but also for girls. It is also known as the "Begging for Skills Festival" or "Daughters' Festival."

In the past, girls would conduct a ceremony to beg Zhinu for wisdom, dexterity and a satisfying marriage in the future.

This was not the case all over China, as the festival varied from region to region.

In some parts of Shandong Province, young women offered fruit and pastries to pray for a bright mind. If spiders were seen to weave webs on sacrificial objects, it was believed the Waving Girl was offering positive feedback.

In other regions, seven close friends would gather to make dumplings. They put into three separate dumplings a needle, a copper coin and a red date, which represented perfect needlework skills, good fortune and an early marriage.

Girls also held weaving and needlework competitions to see who had the best hands and the brightest mind, both prerequisites for making a good wife and mother in ancient China.

Afterwards, they competed to pass a thread through the eyes of seven needles in a single breath.

Nowadays, however, these ancient customs are in danger of being forgotten. More and more young people celebrate Qixi in the same way that Valentine's Day is celebrated in western countries. Hotels, restaurants and flower shops capitalize on this by offering special sales on "Chinese Valentine's Day."

Qixi Festival will fall on August 7, 2008. If it rains on the day, older people might say that Zhinu is crying on the day she meets Niulang and her family again. Maybe she'll also be shedding tears over the customs and traditions that are slowly being lost.