The 15th day of the 7th lunar month is Zhongyuan Festival as well as Hungry Ghost Festival, Yu Lan Pen festival and Shi Hu. The date will be on Agust 15, 2008.

It used to be a religious ceremony in India. The Buddhist would hold the Yu Lan Pen Festival in memory of their forefathers. The Yu Lan Pen canon was compiled to encourage the Buddhists' piety, so it went with the Chinese custom of commemorating their ancestors and became popular in many Chinese regions.

China followed the custom since the Liang Dynasty (502-557 A.D.) and it was evolved into the present Zhongyuan Festival. In addition to the fast provided for the monks, the present festival has special sacrificial ceremonies. 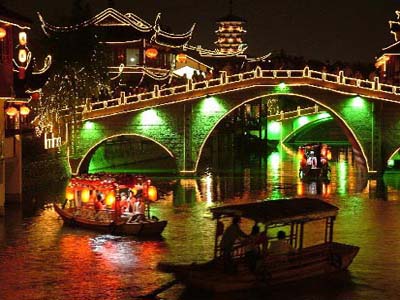 When the festival sets in, a sacrificial altar and a chair is built for the Buddhist priest either at street entrances or in front of villages. In front of the chair sets the statue of the King of Hell Di Zang. Under it are plates of flour-made rice and peaches. On the sacrificial alter are three spirit tablets and three funeral banners. After noon, pigs, sheep, chicken, geese and cakes, fruits of all kinds donated by households are displayed on the altar. On every sacrifice the Buddhist priest will put a triangular paper banner of three colors with special characters. After the rite gets started in solumn music, the priest will strike the bell to call back the souls, other monks singing chimes of incantations. Then he will throw the rice and peaches into the air in all directions to distribute them to the souls.

At night, incense is burnt in front of the door of each household. The more incense, the better, for the amount of incense stands for the degree of prosperity. In some places, people flow water lanterns. Such lanterns are made by setting a lotus flower-shaped lantern on a piece of board. According to the Chinese tradition, the lanterns are used to direct the ghosts. Ghosts find their way back when the lanterns are out. On the festival, all shops are closed to leave the street to the ghosts. In the middle of each street, an altar of incense is set every 100 paces with fresh fruits and sacrifices displayed on it. Behind the altar, the monks will sing songs that only the ghosts can understand. This rite is called shi ge'r, meaning singing ghost songs. 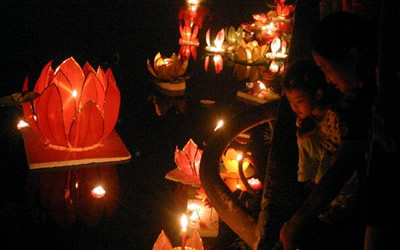