The Great Wall a great success of a trip

No trip to China would be complete without a visit to the Great Wall. Over 7,000 kilometers long, or over 4,000 miles, the wall was built over hundreds of years by different dynasties to defend China from outsiders. As a means of protection, its track record was mixed. As a way to draw tourists centuries later, it is a smashing success.

Most visitors to Beijing travel to Badaling, one of the most frequented parts of the wall. A couple of us had visited Badaling before and wanted a different experience. Badaling can be overwhelming. Vendors selling ice water and trinkets approach visitors every five meters. The wall in this area has largely been rebuilt, so the experience can seem inauthentic. It is also filled with visitors and the human traffic can be suffocating. It is not the ideal place for those wishing to escape the urban jungle.

Wishing to get away from this, we hatched a different plan. We would go to Simatai, a more remote part of the wall a little over 100 kilometers from Beijing. From there, we would escape the hustle, bustle and pollution of Beijing to enjoy big blue sky and solitude. 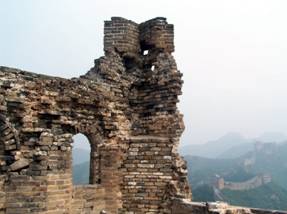 We got up early on a Sunday morning and arrived at the Dongzhimen Bus Station around 8:30. It was packed with people and we had only one Chinese speaker to navigate the chaos. In the crowd, a French couple approached us asking if we were going to the Great Wall and inquired as to whether they could join us. We said yes, and a Franco-American alliance was formed.

The first thing we did was to try and buy a bus ticket to Simatai. Our Chinese speaker was told that we had arrived too late and had missed the last bus out. Before we could get more information, drivers appeared out of nowhere to offer their services to the Great Wall.

After a quick meeting between ourselves and our new French friends, we decided on the driver who would take us. Our new plan was to go to Jinshanling, where he would drop us off. Then he would pick us up at Simatai, 10 kilometers away. This Jinshanling-to-Simatai hike is one of the most famous day hikes on the wall, so we decided to go for it. He said that for six people it was 100 yuan per person, round-trip, or about US$14. For a ride that is two hours out and two hours back, we thought this was a decent deal.