The Legend of Kung Fu The Legend of Kung Fu at the Red Theater in Beijing makes for an exciting evening of action for audiences wishing to see the martial arts. A combination of dance and kung fu, it tells the story of a young boy dropped off at a temple by his mother to become a kung fu master. The audience follows the trials and tribulations the boy faces on his journey to becoming a master.

Upon entering the theater, visitors are allowed to take photographs with one of the child actors in his full wardrobe as he bangs a wooden bowl. The theater has spacious seats and the sound system is of high quality. The dialogue is in English, and when songs are sung translation is provided on giant screens. 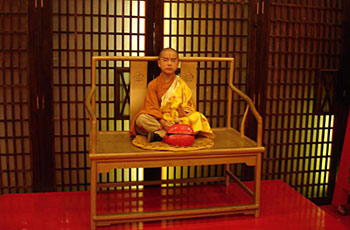 A blend of wushu and ballet, the show has highly trained performers whirling about the stage and even being suspended from the ceiling by long pieces of cloth.

Audiences of a kung fu show probably do not go to see subtle plot twists and witty dialogue, so the emphasis is on the physical actions of the performers above all else. The story of the boy is more of a way to organize the performance than anything else. 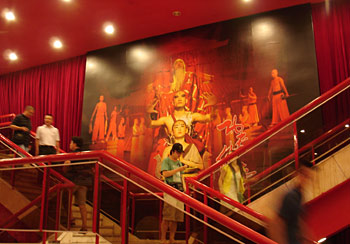 The show runs almost 90 minutes and the action is almost non-stop. Audiences can see the sweat dropping off the actors as they put in a full effort to perform some of the tricks. 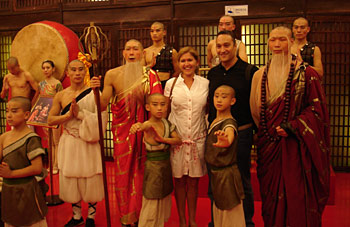 After the show, tables selling DVDs of the show will be set up. There is also a store where t-shirts and other trinkets can be bought. More interesting to many people will be the chance to take a picture with some of the cast members. They stand in full wardrobe and patiently take pictures with the audience, never seeming to break character. 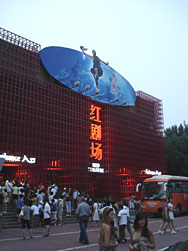 Although the show may be a bit pricey for some, it is worth it for anyone who has some extra cash and wants to see some amazing physical feats.

The Legend of Kung Fu (video and photos) is performed every day at 7:30 PM at the Red Theater 红剧场
Add: Workers' Cultural Palace, 44 Xingfu Dajie, Chongwen District
崇文区幸福大街44号工人文化宫
Booking tel: 010-6710 3671/72/73
Ticket price: 180-680 yuan
How to get there: Take subway to Tiantan East Gate first and then find a taxi there with only 10 yuan payment.