Sanlitun Nanlu (north of the turn-off to The Bookworm), Chaoyang

The Rickshaw is one of Beijing's few genuinely functioning bars, in the sense of the word commonly understood outside East Asia. It spreads over two floors but the lower level has, as far as I can see, an uncertain function. Upstairs has cheap, cold draft beer, a pool table and usually a pretty decent crowd.

There is standard pub grub, including pizza and burgers, and if you really want to get legless, just order one of the reasonably priced cocktail jugs.

In short, there is nothing remarkable about the Rickshaw except its location – China – which makes it an absolutely priceless asset for the capital's expats and the growing number of locals acculturated to the western rules of booze. Long may it resist makeovers. (Reviewed by John Sexton) 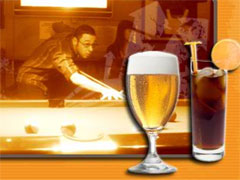