A Chinese blue-and-white porcelain is painted with the image of a young European lady playing on a swing. Looking elegant and lively, her hair is curled and she is wearing the royal costumes of ancient France. 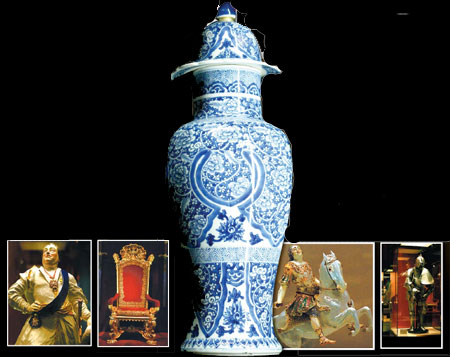 A highlight of an ongoing exhibition at the Palace Museum, Splendor of the White Eagle: Arts and Power of Saxon-Polish Court, is Chinese porcelain with such European patterns.

The show focuses on the "Augustan Age" of the two Polish kings August II and August III.

Eighteen blue-and-white porcelains from the Kangxi period of the Qing Dynasty (1644-1911), are on show. They were produced 300 years ago as presents for the kings.

At that time, Chinese porcelain enjoyed great popularity among the aristocrats. The Saxon-Polish court became one of the major centers for all things Chinese in 18th-century Europe.

Owing to the increase in contacts between China and Europe, each developed highly imaginative ideas about the other.

The exhibition is organized around several themes, such as Representational Displays of Power, Festivities, The Royal Court, Grand Architecture, Arts and Sciences at the Court and Politics and Diplomacy. Within each theme, the central concepts are elucidated with specific examples.

Court life is one of the most interesting themes. Its highlights are "women at court" and "childhood at court". It shows the important court festivities and ceremonial procedures of those times and draws viewers' attention to the royal collections of porcelain, painting and treasures. All items have been carefully chosen for their beauty, uniqueness, and historical significance.

A total of 117 pieces of court relics collected by the museum of Staatliche Kunstsammlungen Dresden are also on display, including the throne of August the Strong, paintings, prints, porcelain, suits of armor, medals and jewels.